I drove and drove down graveled bumpy roads, never sure where I was or where I was going. Then I found the spot. Oh how magical. I saw no one on the 70 mile drive. There were lots of quail-like birds calling and responding. A few lizards. And oceans of quiet.

That lasted until morning, when a truck full of guys pulled up. “You here to claim jump?” the driver growled at me. “No,” I quaked (thankful that first thing in the morning I hadn’t pulled out the metal detector or my teeth). “OK,” he said, and they sped off in a cloud of dust. They returned that afternoon to quiz me some more. Then came back the next day. That afternoon they stopped by once again. They all got out of the truck and motioned me over. They showed me some huge (maybe 2′-3′ tall) smokey quartz crystals that they had unearthed on their claim. We talked for a while about claim jumpers and they showed me their claims on a ratty map. Then they gave me a small grouping of crystals and waved goodbye. Sweet encounter. 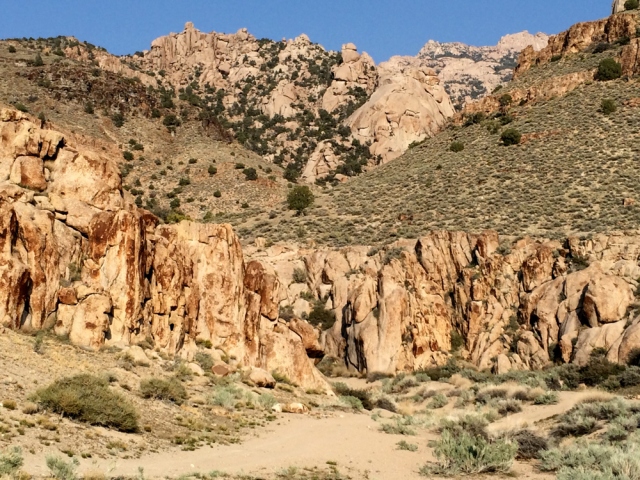 Following the trail into the rocks I eventually found water. Yup. A spring. What a boon it must have been.

The weather was great … hot in the middle of the day, cool at night. I found myself dizzy and lethargic the first few days. It was dehydration. Found that if I drank twice as much water as I peed then I wouldn’t get dizzy. The heat was so intense that I read under an umbrella. The wind was so unpredictable and intensely gusty that I didn’t set up the tarp.

Left after 5 days and went through Marjum Pass onto a new camp spot.