I was camp host to many elk hunters. The campground is adjacent to  the Lizard Head Wilderness Area. It confused me that it was set up to preserve the wilderness, yet allowed/encouraged hunting the animals living in the wilderness areas. 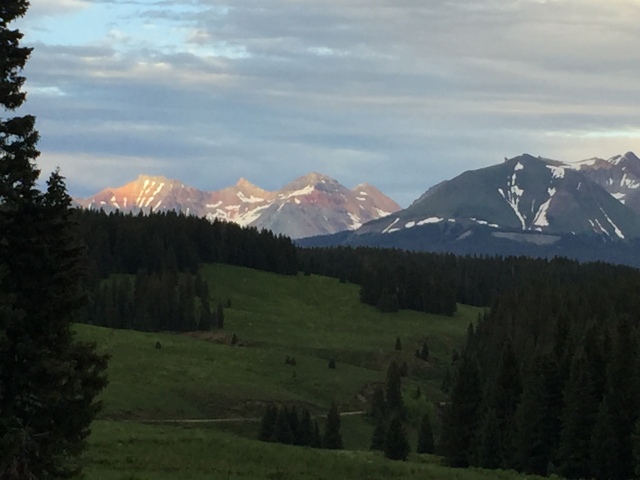 I started investigating the idea of wilderness.

“A wilderness, in contrast with those areas where man and his own works dominate the landscape, is hereby recognized as an area where the earth and its community of life are untrammeled by man, where man himself is a visitor who does not remain.” – Howard Zahniser (author of the act)

Wikipedia says: “Within wilderness areas, the Wilderness Act strives to restrain human influences so that ecosystems [the Wilderness Act, however, makes no specific mention of ecosystems] can change over time in their own way, free, as much as possible, from human manipulation. In these areas, as the Wilderness Act puts it, “the earth and its community of life are untrammeled by man,”untrammeled meaning the forces of nature operate unrestrained and unaltered.”

Wikipedia also says: “Along with many other uses for the American people, wilderness areas are popular for diverse kinds of outdoor recreation but without motorized or mechanical vehicles or equipment except where specifically permitted. Scientific research is also allowed in wilderness areas as long as it is non-invasive. The Wilderness Act was reinterpreted by the Administration in 1986 to ban bicycles from Wilderness areas …”

Heck, you can’t even bike. So hunting? Guns and modern bows are as “mechanized” as bikes.

There is no mention of hunting wild animals in a wilderness area, yet there are lots of hunters in the Lizardhead Wilderness.

“Hunters and anglers play a major role in sustaining Colorado’s natural resources through their willingness to pay for conservation through the purchase of hunting and fishing licenses,” said Bob Broscheid, director of Colorado Parks and Wildlife.

“…. hunters and fishermen generate $1.8 billion every year for Colorado’s economy, up from $845 million in 2004. That supports 21,000 jobs across Colorado. It may or may not surprise you to learn that the Colorado Parks and Wildlife found that almost as many people want to watch wildlife as they want to shoot it. Wildlife watching generated $1.2 billion and supports 12,800 jobs.” This came from an Aspen Times article in Sept of 2018.

So, what do you think? Should actual “wilderness areas” have hunting?