I worked for Rocky Mountain Recreation Company for a few years at the campground called Burro Bridge. I enjoyed working for these people, so when they called and asked for help I jumped. They had 2 hosts  to leave suddenly and were in dire need of a camp host.

A box of paperwork, tools, and a cute golf cart and I was ready. I  carried a huge jar of sun tea in the really hot days.

These deer would join me at breakfast, coffee and NPR and deer. Sweet. 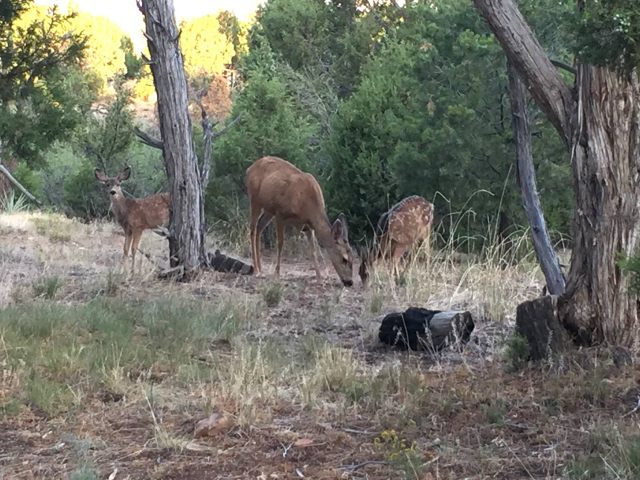 The camp hosting is mostly fun. I like cleaning the bathrooms. It is so easy to make them sparkle and impress the campers. I like talking to the diverse group of campers. I got some terrific hints. I have been trying to think of a way to put some kind of grommets on the topper to attach a tarp. But I didn’t want to drill holes. Russel (from Utah) and Mr Black (from Durango) concurred that it would be possible with aluminum JBWeld. First gently sand the spots, then clean with rubbing alcohol, then weld the grommets onto the topper. Aha. Then I can attach the tarp to the top. Next I was worried that the edges of the lift would tear the tarp. “A pool noodle,” suggested Russel. Oh yes. Thank you, guys.

The paperwork for camp hosting is not fun. Doable after the first few mistake laden sheets. The company wants one kind of figures. The Forest service wants another bunch of figures. Sometimes confusing until you have done it a few times.

After hiring two new camp hosts I retreated to a nearby river to pan for gold. 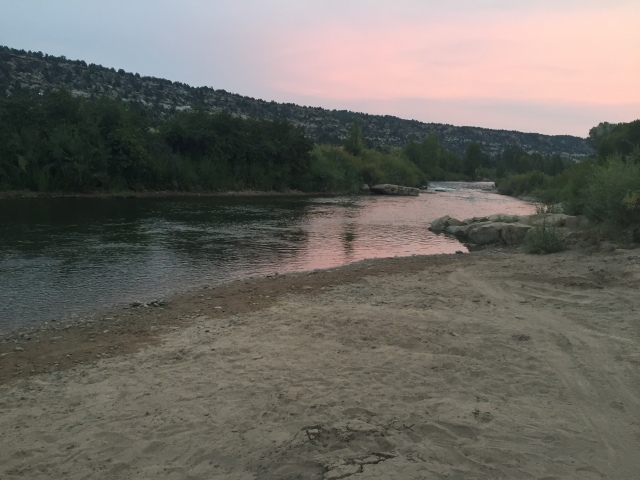