Garbage was a constant problem. Between bears, mice and paper trash I was overwhelmed at times. I learned to unpack all food before storing in the truck. Cereal, for example, got poured into plastic containers. The box and the bag were tossed. As excited as I was to get back on the road I found that spending the extra 1/2 hour in the grocery store parking lot was worth the time. There is usually a trash can near the entrance of the store. So much better than carrying all that packaging around.

I knew that Google maps could work  offline (just set up the route while you have wifi and zoom in around key areas so that the maps get stored in the memory).  I found that I would plan out a route at the library, where I had wi-fi, save the route, head off then invariably change my mind on where to go.  Printed maps were the only way to go for me. They did not depend on wi-fi. They let me change my mind. The downside of the printed maps was that they grew. I would collect maps, to share or to zero in on an area. The Forest Service MVU maps were a problem. They had to be unfolded, and unfolded some more, then folded back up. They were very valuable for finding places to camp, but a pain to deal with. 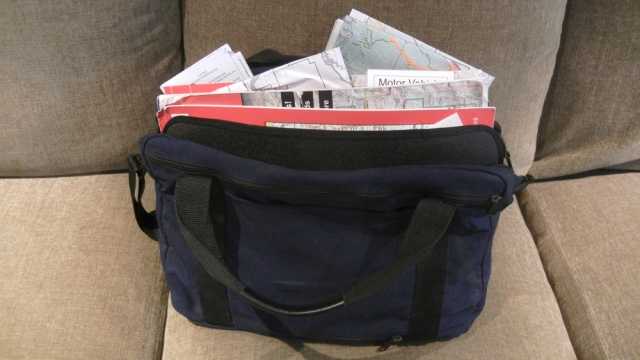 I found that during inclement weather that having an “inside” cache of food was essential. I had some days of rain/hail/wind didn’t let me get out of the truck to cook. So I had a box of “inside emergency” food that let me have coffee and crackers for a day or two. The weather would usually change after a couple of days and I could cook again.

Like Loading...
This entry was posted in Truck Camping Hints and tagged garbage, Google maps, maps, wi-fi. Bookmark the permalink.